Quartets is a great game for young learners or ESL students to practise their vocabulary as it enables for the combination of nouns and adjectives. It also h elps your students practise asking simple questions and using negations.

The game is similar to Go Fish in that you have to collect four of the same cards, e.g. four skirts. For each item, there are four different colors, green, red, blue and yellow. The game comes in a version with and without the names of the clothes on the cards.

The game is played in pairs or small groups, and the cards are divided evenly among the players. The first player to open the game asks another player if they have a certain card to help them complete their set of four, e.g.: “Do you have the red skirt?” They can only ask for cards if they have at least one of the cards needed for the set. A player who has no skirt cards, can’t ask for them. If the other player has the card, he or she has to hand it over and the first player can ask for another card. They can ask the same player or someone else. If the other player does not have the card, the first player loses their turn to the other player. If a quartet is completed, it is laid out on the table. The game ends when all quartets have been created. The player who has the most quartets, wins the game.

If you are looking for more resources just like this, you can find the Lingo Fun shop here. My ESL/EFL resources can be found here. 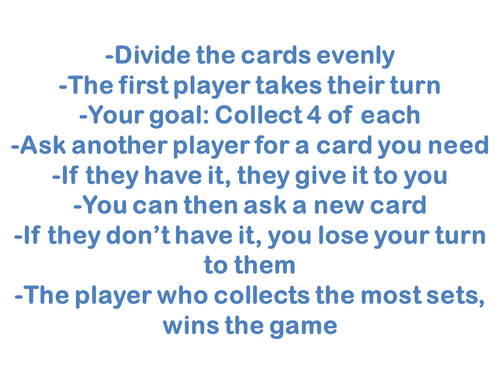