A City on a Hill Making a Book about Puritan Boston

A City on a Hill

Making a Book about Puritan Boston

“Salem, where we landed, pleased us not,” wrote Thomas Dudley, describing the arrival of John Winthrop’s fleet of seventeen ships in June, 1630. Instead, the Puritans under the leadership of Governor John Winthrop, eventually settled on Shawmut Peninsula, better known today as Boston.

A group of wealthy Puritans, including John Winthrop, set up the Massachusetts Bay Company and asked the English King for permission to found a colony in New England. The King agreed and granted the Company a Charter. He wanted to get rid of the Puritans. He was also eager to plant English colonies in the New World before other European countries got too much of a head start. Caught between the ideals of God’s Law and the practical needs of the people, John Winthrop and the Puritans walked a thin and dangerous line when they settled frontier New England.

Five days after his arrival in 1630, Winthrop led his settlers first to Salem and then to Charlestown. But the sudden arrival of Winthrop’s large group more than quadrupled Charlestown’s tiny population. Overcrowding became a problem. Sickness spread quickly. There wasn’t enough water to go around. Two hundred people died before winter came, and another two hundred decided to go back to England. Before winter set in, Winthrop decided to move again. This time he went across the Charles River to Shawmut Peninsula (Boston).

In this activity students read, summarize, and organize their own personal books about Puritan Boston. Included are nearly forty well-researched content pages. In the process they will learn much about what it meant to be a Puritan in early Boston; their religious beliefs; their social order; how they dealt with crime and punishment; war; Indians; pirates; witchcraft; making a living; and many other topics related to early colonial American history.

When they have completed their individual books teachers and students can use that resource for class discussion and a variety of extension activities.

Thank you very much for purchasing this lesson. I would greatly appreciate any feedback and hopefully a favorable review. 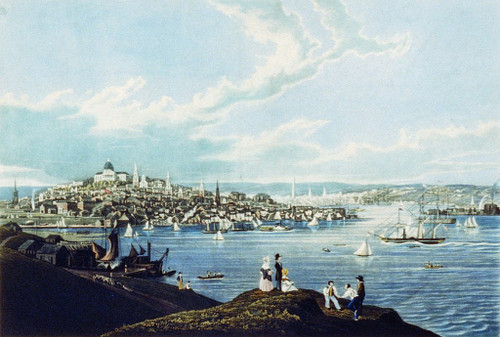 A City on a Hill Making a Book about Puritan Boston