Review your unit using digital task cards! They're versatile and super easy. Just assign and go! Your students will LOVE reviewing America's role in WWII with this digital task card set! These task cards are interactive. This allows students to self-check! With a paid subscription, you even have the ability to track their progress!

✓b. Describe major events in the war in both Europe and the Pacific: Pearl Harbor, Iwo Jima, D-Day, VE Day, VJ Day, and the Holocaust.

✓e. Describe the effects of rationing and the changing roles of women and African Americans or Blacks: include "Rosie the Riveter" and the Tuskegee Airmen.

✓f. Explain the role of Eleanor Roosevelt and the U.S. in the formation of the United Nations.

►Students will need access to internet to use this resource.

►When you purchase this resource, Boom Learning provides you with a one-time, 90-day free trial of the premium student performance reports.

►All users (paid or free) can assign Boom Cards with Fast Pins and students will get instant feedback. These Fast Pins do not record student progress, but they do provide instant feedback and self-grade if the deck is self-grading. Only paid memberships have access to live and stored Supercharged Student Success Reports. 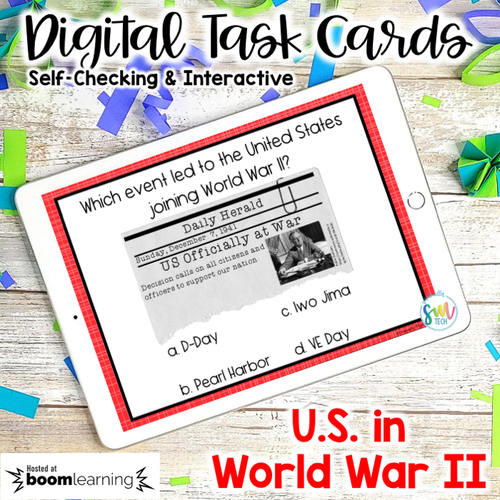