This package includes 2 lessons that cover the Origins of Ancient Rome and How the Roman Republic became the Roman Empire.

For the first lesson, students read a 3 page article over the origins of Rome. The article includes questions and instructions for the students to then create a history booklet where they respond to the questions and then draw pictures to illustrate the main points of each section in their booklet. Teachers who are pressed for time can assign the article as homework or it can still be done in class with having the students only responding to the questions.

For the second lesson, "Republic to Empire" students are divided into teams. Each student is given a 2 and a half page article that covers how famous Roman historical figures led the Roman Republic" down the path to being ruled by Emperors. Students are also given a chart to respond to questions about each figure on. The teacher also creates a blank poster for each figure. After reading about each figure, each student group must then come up with a picture to draw on his poster to illustrate a significant fact about him. At the end of the chart, the class as a whole summarizes the basic problems that led to the end of the Roman Republic.

Answer keys and lesson plan directions are included in file.

The "Origins of Rome" article covers the following topics: 1. Impact of Geography on Roman culture 2. Impact of the Greeks and Etruscans on Rome 3. The beginnings of the Roman Republic 4. Patricians and Plebeians 5. How the Roman Republic government worked (role of Senate and consuls) 6. The Struggle of the Orders 7. How Rome maintained control of their conquests.

The "Republic to Empire" article covers the following topics: 1. Factors causing Plebeian farmers and workers to be poor. 2. Tiberius Gracchus and his appeals to the poor 3. Marius and his reforms to the army. 4. Sulla and his seizure of power. 5. Julius Caesar taking control of Rome 6. How Augustus became first Roman emperor

For Texas teachers, these lessons address the following TEKs:

WH3 History. The student understands the contributions and influence of classical civilizations from 500 BC to AD 600 on subsequent civilizations. The student is expected to: (A) describe the major political, religious/philosophical, and cultural influences of Persia, India, China, Israel, Greece, and Rome, including the development of monotheism, Judaism, and Christianity

WH25 Culture. The student understands how the development of ideas has influenced institutions and societies. The student is expected to: (B) summarize the fundamental ideas and institutions of Western civilizations that originated in Greece and Rome 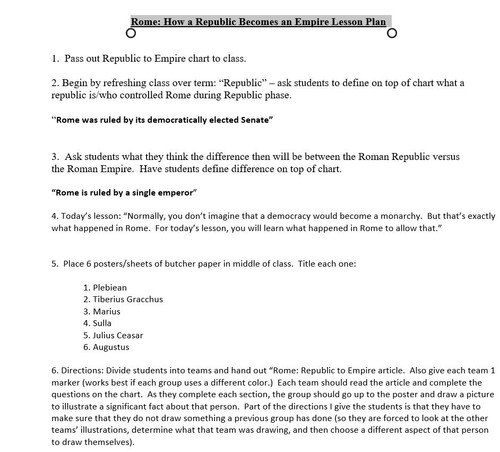