All these resources go with this episode from History For Humans. on the war in the Pacific & Truman's decision to drop the atomic bombs.

This is the fourth and final episode and lesson of my World War II unit that tells the amazing and harrowing story of the dropping of the atomic bombs on Hiroshima and Nagasaki that ended WWII. Teaching through the power of story, the video focuses on the day of the bombing of Hiroshima, the men aboard the Enola Gay and the civilians on the ground, and what convinced Truman it was the right decision. It also unpacks the larger context of the war in the Pacific including the Battle of Midway, Guadalcanal, Iwo Jima, and Okinawa, as well as the planned invasion of Japan. Students learn what convinced President Truman to drop the atomic bombs and why he was criticized for doing and are left to make their own conclusions on the issue.

The resources that go with it include an interactive note sheet that gets students to make predictions, analyze a photograph, define terms, and complete a cause and effect chart. Then the extension lesson actually had two different options. Both are based on four powerful primary sources that get students to think critically about if the bomb should have been dropped. The first option allows students to record insights and create original questions on each of the documents to be ready for a discussion- this one is more open and less scaffolded but works better for a socratic seminar. The other option gives guided questions for students to answer and might be more appropriate for struggling students. You can use even use both and give struggling learners the guided question sheet because they will still be ready for a whole-class discussion or debate. Lastly, they both ask students to answer the question "Why did President Truman believe dropping the atomic bombs on Japan was the right decision?" and have to use evidence from the documents to support their answer. There are answer keys for everything!

This will get students to think deeply about history and an important topic that is still relevant today!

Want to cut out the lecture? Save time and stress? Check out my full year bundle of video-based curriculum!

Check out my store- History For Humans

Thanks for checking it out,
Dan ;) 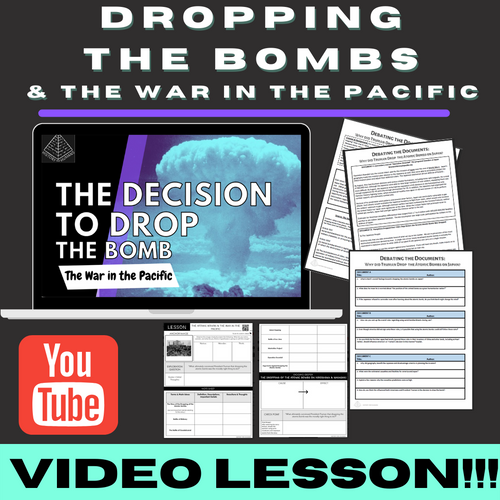