This lesson plan has the students take on the role of either the United States or the Soviet Union during the Cold War.

There are 3 articles that will be used. Each is between 1 - 1.5 pages. A team from each side is assigned one of the articles to read and use to prepare their debate arguments with.

The article topics are: 1. Communism vs Capitalism 2. Truman Doctrine and the Marshall Plan 3. The Space Race The students are given about 45 - 55 minutes to read their article, write down a speech outlining why their side of the Cold War is superior, draw a poster on butcher paper (optional) to visually illustrate their main arguments, and to prepare a few question to ask the team they are paired off against.

Afterwards, the students present their arguments and question their opponents. While the presentations are going, students are given a chart with questions about each topic. They are to answer these questions during the debates.

The chart serves as their notes for this lesson.

An answer key is included for the teacher to use to go over with the class once the debates are done.

The articles cover these specific topics:

For Texas teachers, this lesson addresses the following TEKs:

WH13 History. The student understands the impact of major events associated with the Cold War and independence movements. The student is expected to: (A) summarize how the outcome of World War II contributed to the development of the Cold War

WH18 Economics. The student understands the historical origins of contemporary economic systems and the benefits of free enterprise in world history. The student is expected to: (E) explain why communist command economies collapsed in competition with free market economies at the end of the 20th century 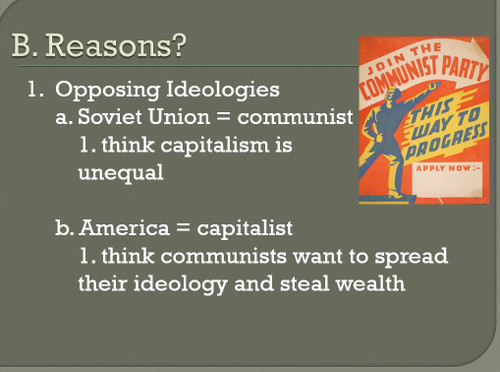