Elf tells the story of ‘Buddy the Elf’ who was accidentally taken to the North Pole in Santa’s sack one Christmas Eve. He stayed in the North Pole until adulthood and grew up thinking he was an elf himself. One day he found out he was a human, and decided to go and visit his biological father in New York.

On arrival he wasn’t welcomed by his father until a DNA test reassured him that he was actually his son. The family grew to like Buddy, and he also found a girlfriend – but then everything changed when he fell out with his father one day and decided to leave.

But as he was walking alone he heard a crash in Central Park, when he went to investigate he noticed it was his good friend, Santa. The family caught up with him and realized he had been telling the truth all along, he was in fact an elf from the North Pole. The friends and family all worked together to lift Christmas spirit and thus power Santa’s sleigh to ensure he could finish his deliveries.

There are song recommendations throughout the script, with a mixture of traditional Christmas songs and modern songs. There are 21 speaking parts, with additional non-speaking roles too for up to 30 students. The play is around 40-50 minutes long.

I hope you have fun with it, my class had a ball! 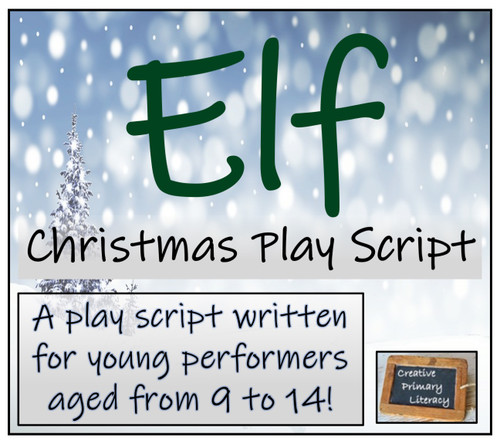