This is a 3 and a half page article that covers the events of the English Civil War and the Glorious Revolution.

The article is divided up into 4 sections. After each section, students are directed to either answer questions about the section or to draw pictures to illustrate the main ideas found in each section.

For example, after the first section, students are instructed to draw a character collage of King James I showing his beliefs about the divine right of kings.

The article covers these topics:

For Texas teachers, this lesson covers the following TEKs:

WH9 History. The student understands the causes and effects of major political revolutions between 1750 and 1914. The student is expected to: (A) compare the causes, characteristics, and consequences of the American and French revolutions, emphasizing the role of the Enlightenment, the Glorious Revolution, and religion

WH20 Government. The student understands how contemporary political systems have developed from earlier systems of government. The student is expected to: (A) explain the development of democratic-republican government from its beginnings in the Judeo-Christian legal tradition and classical Greece and Rome through the English Civil War and the Enlightenment

WH20 Government. The student understands how contemporary political systems have developed from earlier systems of government. The student is expected to: (B) identify the impact of political and legal ideas contained in the following documents: Hammurabi's Code, the Jewish Ten Commandments, Justinian's Code of Laws, Magna Carta, the English Bill of Rights, the Declaration of Independence, the U.S. Constitution, and the Declaration of the Rights of Man and of the Citizen 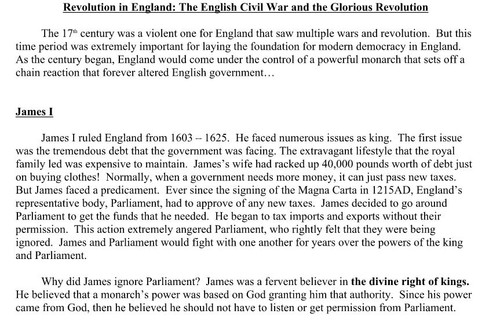