This zip file contains 9 different documents/materials which can be used to compose a unit for biology students introducing them to evolution. Evidences for evolution, natural selection, examples of evolution in modern times, introduction to cladograms and the heterotroph hypothesis are among the major topics in the materials in this zip file. A specific listing of the learning goals addressed by the components of this zip file appears later in this description.

Documents have been provided in both pdf and editable word format to allow you to tailor these materials to your course and your students.  These documents are well suited for use in distance learning environments.

These lessons have been correlated to the NGSS, Common Core and NY Living Environment Core Curriculum standards.

Upon completion of this unit the student will:

1. define the term evolution and recognize that current life forms have evolved from earlier life forms.

2. recognize that evolution provides an explanation for the differences in structure, function, and behavior among life forms.

3. recognize that radioactive dating has determined the approximate age of the earth as 4.6 billion years.

4. define the term fossil and list examples of these.

5. state the law of superposition and relate it to the age and complexity of fossils found in undisturbed horizontal rock layers (strata).

6. explain how observations of fossils in adjacent rock strata often support the theory of evolution.

7. explain how gene mutations may be increased in incidence.

8. recognize that gene mutations can only be passed on to the offspring if they occur in an organism's sex cells.

9. state Darwin's theory of natural selection and explain the following features in his theory; overproduction, competition, variations, survival of the fittest, reproduction, and speciation.

11. explain some weaknesses of Darwin's theory and compare the modern natural selection theory to that of Darwin.

12. state two sources of variation not recognized by Darwin.

14. explain why increased genetic diversity tends to enhance the survival of a species.

15. recognize traits beneficial to an organism enhance its survival, while traits which are not beneficial hurt its chances for survival.

16. explain the following examples of evolution in modern times in terms of the theory of natural selection; peppered moth, insect resistance to insecticides, bacterial resistance to antibiotics.

17. recognize that evolutionary factors operate on populations, not individual organisms.

18. describe the variety of pathways evolution may take.

19. recognize that the extinction is common and may occur when the adaptive characteristics of an organism no longer support its survival.

21. recognize that organisms are classified based on structural similarities and evolutionary relationships.

22. realize that differences between parents and offspring can accumulate over generations so that descendants become different from their ancestors.

23. recognize that the more similar two organisms DNA sequences, the more closely related they are from an evolutionary standpoint.

24. recognize that 3 to 4 billion years ago it is thought that the first primitive life appeared on the earth.

26. recognize that about 1 billion years ago, increasingly complex multicellular organisms began to appear.

27. recognize that the great diversity of organisms is the result of billions of years of evolution that has filled the niches of the earth with life forms.

Students who demonstrate understanding can:

HS-LS3-2. Make and defend a claim based on evidence that inheritable genetic variations may result from: (1) new genetic combinations through meiosis, (2) viable errors occurring during replication, and/or (3) mutations caused by environmental factors.

HS-LS4-2. Construct an explanation based on evidence that the process of evolution primarily results from four factors: (1) the potential for a species to increase in number, (2) the heritable genetic variation of individuals in a species due to mutation and sexual reproduction, (3) competition for limited resources, and (4) the proliferation of those organisms that are better able to survive and reproduce in the environment.

HS-LS4-3. Apply concepts of statistics and probability to support explanations that organisms with an advantageous heritable trait tend to increase in proportion to organisms lacking this trait.

HS-LS4-4. Construct an explanation based on evidence for how natural selection leads to adaptation of populations.

HS-LS4-5. Evaluate the evidence supporting claims that changes in environmental conditions may result in: (1) increases in the number of individuals of some species, (2) the emergence of new species over time, and (3) the extinction of other species.

RST.11-12.1 Cite specific textual evidence to support analysis of science and technical texts, attending to important distinctions the author makes and to any gaps or inconsistencies in the account.

RST.11-12.8 Evaluate the hypotheses, data, analysis, and conclusions in a science or technical text, verifying the data when possible and corroborating or challenging conclusions with other sources of information.

Explain the mechanisms and patterns of evolution.

3.1a The basic theory of biological evolution states that the EarthÕs present-day species developed from earlier, distinctly different species.

3.1b New inheritable characteristics can result from new combinations of existing genes or from mutations of genes in reproductive cells.

3.1c Mutation and the sorting and recombining of genes during meiosis and fertilization result in a great variety of possible gene combinations.

3.1e Natural selection and its evolutionary consequences provide a scientific explanation for the fossil record of ancient life-forms, as well as for the molecular and structural similarities observed among the diverse species of living organisms.

3.1f Species evolve over time. Evolution is the consequence of the interactions of (1) the potential for a species to increase its numbers, (2) the genetic variability of offspring due to mutation and recombination of genes, (3) a finite supply of the resources required for life, and (4) the ensuing selection by the environment of those offspring better able to survive and leave offspring.

3.1h The variation of organisms within a species increases the likelihood that at least some members of the species will survive under changed environmental conditions.

3.1i Behaviors have evolved through natural selection. The broad patterns of behavior exhibited by organisms are those that have resulted in greater reproductive success.

3.1j Billions of years ago, life on Earth is thought by many scientists to have begun as simple, single-celled organisms. About a billion years ago, increasingly complex multicellular organisms began to evolve.

3.1k Evolution does not necessitate long-term progress in some set direction.    Evolutionary changes appear to be like the growth of a bush: Some branches survive from the beginning with little or no change, many die out altogether, and others branch repeatedly, sometimes giving rise to more complex organisms.

3.1l Extinction of a species occurs when the environment changes and the adaptive characteristics of a species are insufficient to allow its survival. Fossils indicate that many organisms that lived long ago are extinct. Extinction of species is common; most of the species that have lived on Earth no longer exist.

¥ Organizes data through the use of data tables and graphs

¥ Recognizes assumptions and limitations of the experiment

Many more biology materials are available from Monday's Rescue.   The Biology/Life Science Course contains 22 units which can be used to develop a full year course.   A purchase of the Biology/Life Science Course provides significant savings of over 70% compared to purchasing each of the 22 units individually.  This course is available for $24.99.   It contains over 900 pages of learning materials and 1500 plus PowerPoint slides.

Purchase of the product is for classroom use by the purchaser only. It is a violation for individuals, schools, and districts to redistribute or sell this item on the Internet or to other individuals. I do encourage you to use and edit these documents to suit your needs with your own students in distance learning environments.

This work is licensed under a Creative Commons Attribution-NonCommercial-ShareAlike 4.0 International License. 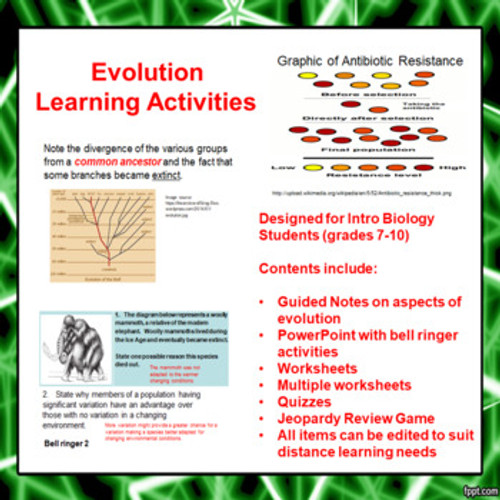