ELEMENTARY FRENCH FOR CHILDREN FRUITS VOCABULARY WORD SEARCHES Mots Cachés are a fabulous way of encouraging learners to engage with the written word in French, refreshing and reinforcing language as they complete the grids. This freebie features two differentiated word searches, focusing on 25 fruits in French, each grid with slightly different challenge. The fruits include masculine, feminine, singular and plural, with a blend of definite and indefinite articles - this really helps learners think a little more creatively about language, and their new vocab - they may learn la pomme for example, and it’s useful to give students opportunity to think about grammatical concepts, and how la becomes une for example. I’ve selected high-frequency fruits, such as apple or pear, and also fruits which may be new to some learners, such as redcurrant or starfruit. There are a range of phonemes and sounds too, such as the silent ll (groseille) and the use of the plural before a vowel, to show that the letter s isn’t always silent, for example les ananas or les olives.

There is 1 French to English grid, labelled with a lemon, where learners are prompted with the French words, and look for them in French in the grid. For additional consolidation, each grid also features an English word list that they have to complete, really putting their knowledge to the test!  There is also an English to French grid, labelled with a raspberry, where the prompt words are given in English, and learners have to find the French equivalent in the grid. For additional consolidation and practice in writing/spelling in French, they also complete the French word list on each page. Learners can tell in which direction the words are written by looking at the arrow key on each grid. Having a good bilingual dictionary to hand is also a good idea, as this provides a further focus on developing literacy in both French and English, and facilitates learner independence.

There is an answer grid for each word search, so that learners can check their answers - or use for a little extra help if they need it. The word searches are in landscape format, as I’ve found this to be the best format for beginning learners of French. Use as starters, refreshers, plenaries or fun-time fillers at any time during the school year, as well as when you’re introducing fruits in French.

The resource is non-editable in a zipped format. The license is a single-user license only - the resource is copyright, all rights reserved - it may not be copied, rewritten, shared or distributed in any way - please read the Terms of Use.

Have a browse in my store when you get chance - there are more French printables, and a range of other languages and activity types too! 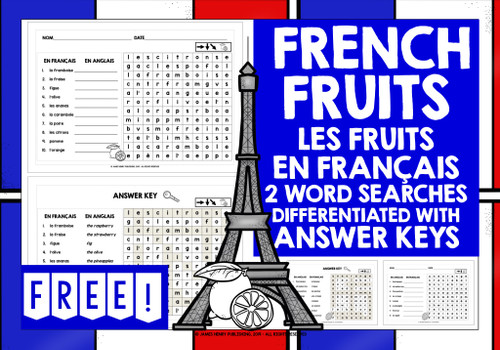