This Video Response Worksheet and Key is based on the BBC documentary series "Human Planet - Episode 6 - Grasslands: Roots of Power.".

(NOTE #1: Some episodes of Human Planet, such as the "Jungles" episode, contain extensive nudity. Previewing videos before showing them to your class is strongly suggested.)

(NOTE #2: BBC also offers a Director's Cut with the episodes in a different order, as well as an additional brief "Behind the Scenes" episode. For example, "Oceans" is Episode 1 in this series, but Episode 2 in the Director's Cut series. The content in both series is the same.)

Video Response Worksheets will turn your history or science lesson into a rich educational experience that keeps students attentive, engaged, and accountable. The questions are designed so that they occur at a regular pace to keep the students engaged but not overloaded. They are also designed so that a review of the completed worksheet gives students a basic overall summary of the video.

This episode is approximately 50 minutes long.

ABOUT THE SERIES: Following in the footsteps of Planet Earth and Life, this epic eight-part blockbuster is a breathtaking celebration of the amazing, complex, profound and sometimes challenging relationship between humankind and nature. Humans are the ultimate animals - the most successful species on the planet. From the frozen Arctic to steamy rainforests, from tiny islands in vast oceans to parched deserts, people have found remarkable ways to adapt and survive. We've done this by harnessing our immense courage and ingenuity; learning to live with and utilize the other creatures with which we share these wild places. Human Planet weaves together eighty inspiring stories, many never told before, set to a globally-influenced soundtrack by award-winning composer Nitin Sawhney. Each episode focuses on a particular habitat and reveals how its people have created astonishing solutions in the face of extreme adversity. Finally we visit the urban jungle, where most of us now live, and discover why the connection between humanity and nature here is the most vital of all.

IN THIS EPISODE: Grasslands feed the world. Over thousands of years, we humans have learned to grow grains on the grasslands and domesticate the creatures that live there. Our success has propelled our population to seven billion people.

BUY THE MULTI-EPISODE BUNDLE AND SAVE 58%. Individual episode worksheets are $1.49. Purchased separately, all eight cost $11.92. Buy the entire bundle for only $4.95. 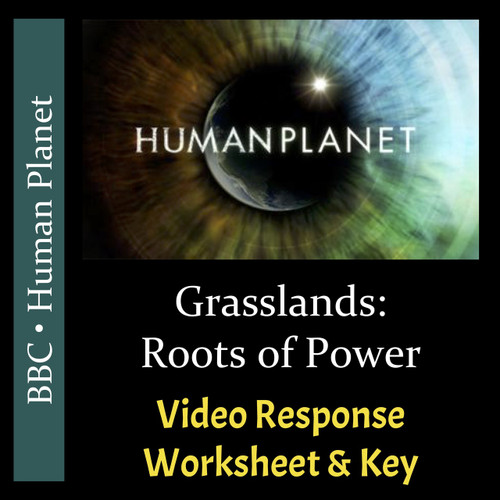