Are you scampering about for an alphabet game that teaches letter sound with highly attractive visual representation? Well, pause for some time cause I've created just the right game your students will love to play and appreciate.

What is it? The Ladybug Alphabet Bingo Game is designed to teach letter recognition, phonemic awareness, and matching pictures to letters. Its an interactive game that can be cut-out and used in a variety of ways.

Who is it for? PreK through first grade will be able to understand the concept of matching picture/word to letter. For example, when they see the picture of an alligator, they will listen for the initial sound /a/ in the word and look for the letter (A) that matches it on the ladybug.

How to play it? Whole/small group – Ladybug cut-outs are distributed to individuals. Teacher spins the alphabet wheel for the class. Picture cards are distributed according to each letter on the ladybug for younger students to avoid overwhelming them with an abundance of cards. Older students can be given 26 picture cards which represents individual letters of the alphabet.

Independent– Students play the game on their own. First choose a ladybug, spin the wheel, and then mark their letters with the corresponding picture card.

How to set it up? Once downloaded, print out the ladybugs, alphabet wheel, and picture cards. Cut out all parts. Laminating the entire game will keep it lasting a long time. Anything for a spinner can be used or one can be purchased at dollar stores or on-line.

How to use it? This activity can be used in literacy centers to promote phonics and letter recognition. It can also build vocabulary as students match up pictures with initial letters. It can also be used as an assessment tool for phonological awareness activity.

Alphabet Wheel - The wheel consists of 26 letters of the alphabet which can be manipulated in a couple of ways. Teacher spins the wheel and call out the letter and sound indicated by the arrow, while tracking the letters already called. Students can also independently spin the wheel in a small group setting. Teachers can choose to purchase spinners or use paper clips.

Picture Cards - There are six sets of cards. Each card contains a picture that corresponds to each letter of the alphabet. Teachers can choose to distribute six cards or one set of 26 cards. Each card must be facing up in order for students to identify immediately. Once students have discovered a matching card, they must quickly pick it up and place it on the corresponding letter which appears on the ladybug. Once the ladybug is entirely covered up, students will call out “Ladybug Alphabet”, to indicate a winner. Students are then instructed to call out their letters along with the sounds and pictures.

Why is it a great activity? This is a fun and attractive game that will spark the interest of kids playing it. What kid doesn’t like spinning an alphabet wheel and having a good time placing matching picture on brightly colored ladybugs. Its enriching and it promotes learning and is a fundamental of reading.

Check out my store for additional resources. 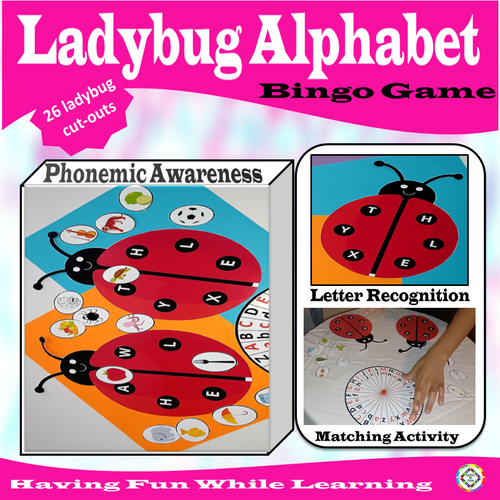