With the exception of the PowerPoint all documents are available in word (which easily edits to meet your needs) and pdf formats. Answer keys are included for all items. The bundle contains a 106 slide PowerPoint and 92 pages of learning materials. Answer keys are not included in the page count. The specific contents of the bundle are listed below:

Topics addressed in this learning bundle include but are not limited to; Models of the Atom, Relationship of Mass and Energy, Mass Defect/Critical Mass, Fission, Fusion and Transmutations, Half-Life, Standard Model of Particle Physics, Particle Accelerators and Nuclear Reactors, Nuclear Waste Disposal as well as many others.

The contents of this bundle are well suited for use in a traditional classroom. They may also be easily utilized to support remote learning situations.

HS-PS1-8. Develop models to illustrate the changes in the composition of the nucleus of the atom and the energy released during the processes of fission, fusion, and radioactive decay.

HSN-Q.A.2 Define appropriate quantities for the purpose of descriptive modeling.

HSN-Q.A.3 Choose a level of accuracy appropriate to limitations on measurement when reporting quantities.

Upon the completion of this unit the student will be able to:

1. recognize that electromagnetic radiation has a wave-particle duality.
2. briefly describe the photoelectric effect.
3. define the term quantum.
4. explain how quantum theory relates to the photoelectric effect.
5. utilize the equation E=hf and its equivalent forms in calculations.
6. utilize a graph to determine Planck's constant.
7. define the term photon.
8. recognize a photon has both energy and momentum.
9. utilize a reference table to determine the type of electromagnetic radiation a photon with a specific frequency consists of.
10. define the terms threshold frequency and work function and explain how they relate to each other.
11. calculate the work function or threshold frequency for a selected material.
12. compare X-ray photons to visible light photons in terms of the photoelectric effect.
13. briefly explain the Compton effect.
14. utilize the equation for determining the momentum of a photon in calculations.
15. briefly describe the contribution of the ancient Greeks to the development of atomic theory.
16. describe J.J. Thomson's model of the atom.
17. describe Rutherford's gold foil experiment.
18. list several key results of Rutherford's gold foil experiment and the conclusions derived from these results.
19. describe Rutherford's solar system model of the atom.
20. describe Bohr's atomic model and relate it to the energies of associated electrons/photons.
21. explain what is meant by the stationary state of an electron.
22. explain what is meant by an energy level of an electron.
23. define the following terms related to electron energy; ground state, excited state and excitation.
24. explain how electron excitation can occur.
25. explain how spectral lines form.
26. explain why bright line and dark line spectra form.
27. utilize a bright line or dark line spectrum to identify an element.
28. define the term ionization energy.
29. utilize energy level diagrams to calculate the energy gained or lost by an electron.
30. recognize that as an electron falls to an energy level closer to the nucleus, it loses energy and releases energy from the atom.
31. list several weaknesses of the Bohr model.
32. briefly explain the cloud model of the atom.
33. describe the charge, mass and location of protons, neutrons and electrons in the atom.
34. define the term nucleon.
35. define the term atomic mass unit.
36. define the terms mass number, atomic mass and atomic number.
37. recognize lower atomic numbers are associated with greater element stability.
38. recognize that for an atom to be electrically neutral, its number of protons must equal the number of electrons.
39. define the term ion, cation and anion.
40. define the term isotope.
41. recognize that different isotopes may have different properties.
42. explain what is meant by the strong nuclear force.
43. recognize energy and mass are equivalent forms of the same thing.
44. define the terms nuclear binding energy and mass defect.
45. briefly describe how particle accelerators are used to study matter.
46. list the four fundamental forces in the standard model and discuss their relative force strength and range.
47. explain what is meant by the electroweak force.
48. recognize particles can be classified based upon their interactions with other particles.
49. describe what is meant by a hadron and list examples of these.
50. describe what is meant by a lepton and list three examples of these.
51. briefly describe positrons and neutrinos.
52. recognize that baryons and mesons are two categories of hadrons.
53. recognize baryons are larger hadrons.
54. identify protons, neutrons and hyperons as examples of baryons.
55. recognize a meson is a particle of intermediate mass.
56. recognize mesons decay into electrons, positrons, neutrinos and photons.
57. recognize baryons are made of three quarks.
58. recognize a meson is made of a quark and an antiquark.
59. explain what an antiparticle is.
60. recognize that every particle has an associated antiparticle.
61. describe the composition of antimatter.
62. explain what a quark is.
63. list six basic types of quarks.
64. describe the quark composition of a proton or neutron.
65. explain what is meant by an antiquark.
66. define the term radioactivity.
67. recognize that the stability of an atom is dependent upon its proton to neutron ratio.
68. define the term transmutation.
69. describe some characteristics of radioactive atoms.
70. recognize that atoms with atomic number of 83 or higher are radioactive.
71. explain what is meant by a radioactive emission.
72. recognize that each radioisotope has a specific mode and rate of decay.
73. describe alpha, beta and gamma decay in terms of their mass, charge and penetrating power.
74. balance equations involving alpha, beta, gamma and positron decay.
75. recognize some radioactive emissions can be separated by electric or magnetic fields.
76. define the term half-life.
77. given the time frame and initial/remaining masses, calculate the half-life of a radioactive material.
78. use a reference table to determine the half-life and decay mode of a radioactive material.
79. distinguish between natural and artificial transmutations.
80. distinguish between and balance equations involving fission and fusion reactions.
81. define the terms critical mass and chain reaction.
82. state the basic purpose of a nuclear reactor.
83. briefly explain why breeder reactors are used.
84. discuss the role of the following components of a nuclear reactor; moderator, control rods, coolants and shielding.
85. explain why nuclear fusion is not used to produce electricity.
86. list some methods of radioactive waste disposal and some problems associated with each method.
87. discuss five uses of radioisotopes and some specific radioisotopes associated with these uses.

Purchase of the product is for classroom use by the purchaser only. I do encourage you to use and edit these documents to suit your needs with your own students in distance learning environments.

This work is licensed under a Creative Commons Attribution-NonCommercial-ShareAlike 4.0 International License. 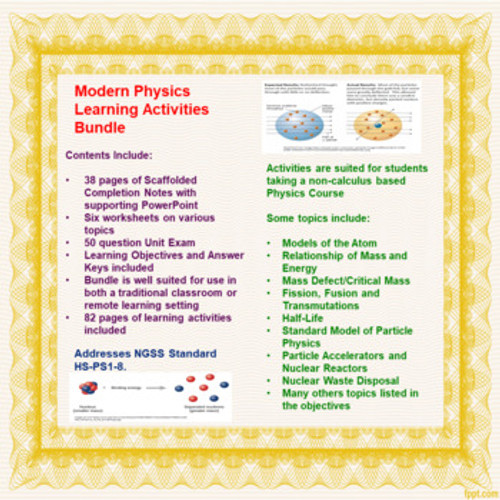