This lesson plan covers the motivations of the United States, Britain, and France as they negotiated the Treaty of Versailles.

It also covers the terms of the Treaty and what effects the treaty had. During this lesson, students are broken up into 4 teams to represent the different countries involved.

Each team is given a sheet of paper that outlines the main goal each country is trying to achieve and the reasons why for the following 4 terms: 1. Who to blame for war? 2. How much reparations should Germany pay? 3. Can Germany keep its military? 4. Should Germany lose land?

Each team then has to negotiate with the other countries to come up with a final treaty.

Afterwards, the teacher goes through a powerpoint and discusses the main issues surrounding the treaty.

The powerpoint will cover: a. The motivations of France, Britain, and the United States b. President Wilson's plans for self-determination in Europe and the League of Nations c. The terms of the treaty itself d. The negative effects of the treaty.

At the end, I have the students then write a paragraph on what the Treaty of Versailles would state if they had written it and why.

For Texas teachers, this lesson covers the following TEKs: 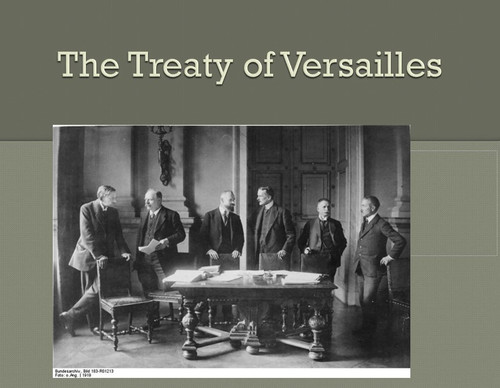