A Reformation Mystery: The St. Bartholomew’s Day Massacre - Who to Blame

On August 18, 1572 Marguerite de Valois (a Catholic), the sister of French King Charles IX, was wed in Paris to Henry III of Navarre (a Protestant). Their marriage was intended to solidify the provisions of the Peace of St. Germain that ended the Third French war of religion unleashed by the Protestant Reformation. The wedding drew hundreds of French Protestants (called Huguenots) into Paris to honor Henry. But Paris was predominantly Catholic and resentment was high. A fatal decision was then made by one or more in the court of the French king that it was necessary to assassinate the leading French Huguenot, Admiral Gaspard de Coligny, who they believed was likely to involve France in a war with Catholic Spain. The first assassination attempt failed but the second attempt succeeded and led to one of the most notorious massacres in European history.

The St. Bartholomew’s Day Massacre began in Paris on the night of August 23 and lasted for three days. This bloody event launched a surge of Catholic mob violence directed against the Calvinist Protestants (Huguenots) during the French Wars of Religion. But who was responsible for this crime against humanity? Tradition has it that Catherine de Medici was primarily responsible? But is that true? Maybe it was her son, Charles IX, the Catholic King of France. Or perhaps the real villains were the Guise family, or the duke of Anjou, or maybe Henry III of Navarre?

In this activity you and your students will have a chance to explore this event and to render judgement of who bares the most responsibility. 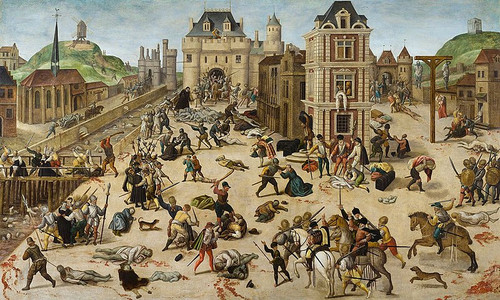 A Reformation Mystery: The St. Bartholomew’s Day Massacre - Who to Blame