This activity combines the traditional jigsaw strategy with a class debate and is one of my favorite activities. Every kid is held accountable for preparing for and participating in the debate, and they are highly motivated because of the competitive nature of the activity. In this lesson, students hold debates in groups of three arguing for or against Andrew Jackson being on the $20 bill. The Secretary of the Treasury in each group will make the final decision based on the arguments presented.

Students are divided into three "teams" -

- Secretary of the Treasury team

- Debaters that want him removed from the $20

In these teams, they work together to become experts in their roles. The Secretary of the Treasury team analyzes what characteristics people on the $20 bill should exhibit and the two debate teams prepare arguments for their side. They also predict what arguments the other side will give and prepare rebuttals to those arguments.

Students are then put into groups of three consisting of one person from each of the expert teams. They hold mini-debates with the Secretary of the Treasury running the debate, taking notes, and then making the final decision about whether or not Andrew Jackson should be removed from the $20 bill.

This product consists of the teacher guide and the research/notes sheets for each role in the debate. It can be used as an assessment for students to show what they have learned about Andrew Jackson. 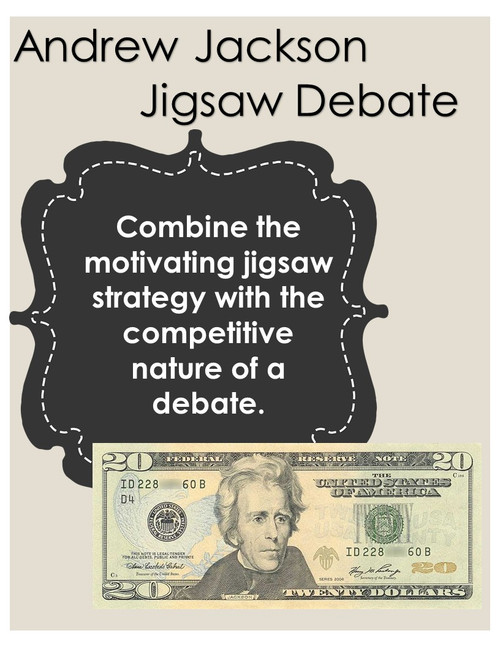