Classification of Animals - Taxonomy - What am I? Yes/No Card Game

We devised this game to support our children's questioning skills, deduction skills and characteristics of animal knowledge with key features and names of each major group. We have taken the existing version of the well known party game and updated it for the classroom/learning environment.

We have provided 56 Animal Name cards which players use to ask questions about - but where we have developed the game, to support learning and questioning, is to provide the children with 5 question openers - supporting their questioning skills, and 43 vocabulary cards related to the features and characteristics of animals. This takes the game to the next level and focused on embedding learning of the topic, questioning skills and deducing answers from the information gained.

Once purchased and downloaded, open the ZIP and open the main document.

Print the document in colour to support the color coded vocabulary, hint and shape name cards– 35 pages of resources and instructions.

To maintain the quality of the resources when using on a regular basis, laminate each page to keep the resource in good condition for longer. This will also strengthen each of the cards without having to print on card.

Once printed and laminated, cut each of the cards out. You should have:

Your resource is now ready for use.

The game is easy to play and designed for up to 6 players (but this can also be played in smaller and larger groups, including the whole class, with one child asking the questions and the rest of the class answering them).

1) Set out the game cards at the beginning of play. The 56 animal name game cards should be in a pile, faced down so that no-one can see the name of the shape being picked.

2) Both the 43 Handy Hints Vocabulary cards and the 5 question starter cards should all be face up and separated so that each player can see the cards.

3) Each player should have a stand in front of them, facing away from them.

4) Decide which player is going to start. Order of play will then move clockwise from the first player.

5) Decide who will tally the number of questions asked for each player.

You are now ready to play.

6) Player one takes a card from the pile of Animal Name cards and – without looking at the card, places it on the stand so that all of the other players can see the card.

7) Player one then starts asking a series of questions to try and work out the name of the animal on their game card.

8) For each question asked, the answer from the other players can only be “yes” or “no”.

9) After each question has been asked, the scorer records a tally.

10) Once the player has guessed correctly the name of the animal, the scorer adds up the amount of questions and that is the score for that player.

11) The next player then repeats these steps.

12) Game play continues until all the cards have gone, or the players have played an equal number of cards each.

13) The player with the least number of points/questions asked is the winner.

1) You can also play this game in the inverse where player one takes the card and does not show the other players. Instead, the other players take it in turns to ask questions about the animal. Each question asked is a point to the player who asked it. The round stops when the animal has been guessed. The person who guessed the animal takes one mark from their total.

2) The class teacher can also pick a card and ask specific children to ask a question about the animal. Children can keep asking questions until the animal has been guessed.

3) The class teacher can take a card and they can start describing the animal using scientific properties. The first child to guess the name of the animal correctly is the winner.

This product can be used as a Science Center, early morning activity or early finisher resource to support learners who are independent, as well as a whole class activity.

Thank you for viewing our products. 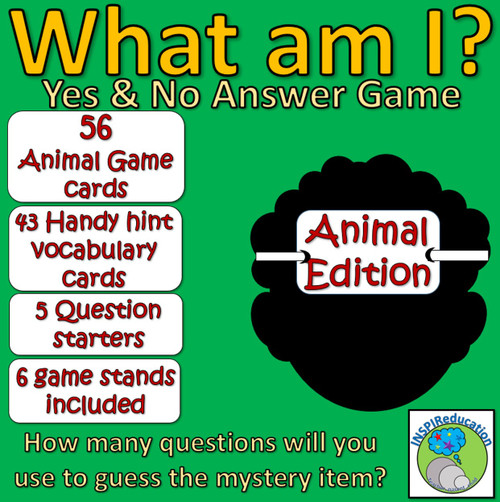 Classification of Animals - Taxonomy - What am I? Yes/No Card Game