At the time, the written Declaration of Independence wasn’t considered to be very important. The Lee Resolution, passed by the Continental Congress on July 2, 1776, was the actual, official “declaration” of the colonies’ independence from England. In fact, John Adams gave the task of writing the formal Declaration to his junior, Thomas Jefferson, as he felt that few would remember the document or its author.

Adams, of course, was quite wrong. Although none of Jefferson’s text was original or earthshattering -- but rather a restatement of widely held enlightenment belief as to the nature of liberty of propertied men – his concise and eloquent prose espousing those beliefs have become the standard definitions of the nature of liberty for all free people, men and women alike. The Declaration of Independence has become the global standard for liberty, with language that still moves us today, centuries later.

This activity engages students in deciphering and analyzing the Declaration itself. Students will translate key excerpts from its original language into more easily accessible modern English, identify the sections of the Declaration that the excerpts come from and the specific colonial grievances to which Jefferson referred, and then use those translations as the basis for a discussion of the Declaration’s effect on the American psyche and the world at large.

Materials include: *teacher’s instructions; *excerpts from the Declaration, broken up into easily digestible sections on a worksheet; *an answer guide to the worksheet

Materials are provided in one zip file. 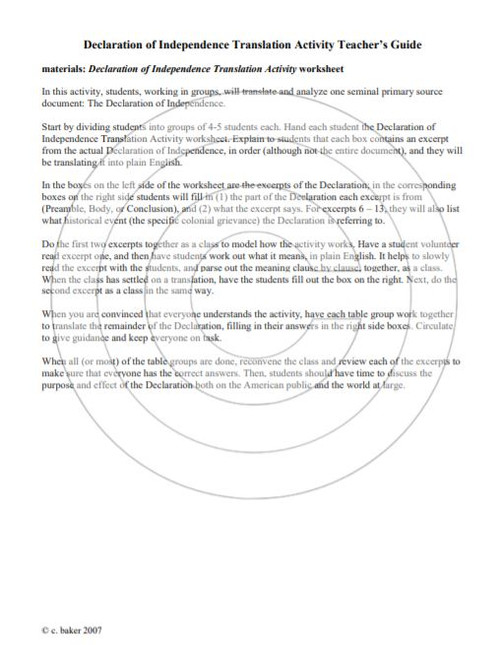