Was it a true democratic Republic?

In the summer of 1378, the lowest class of woolen workers, known as the “ciompi” because of the wooden clogs they wore, rioted. Why? They were in abject poverty. Shouting, “Down with the traitors who allow us to starve,” they looted the houses of those merchants they saw as their oppressors, forcing them to flee for their lives. They demanded three new guilds of their own. They got their wish, however it did not last long. The jealousy of their fellow workers in other trades, combined with the power and money of their former employers, soon destroyed the “ciompi” guilds. By

Re-enacting the Ordinances of Justice of 1293, which had defined the constitution of Florence as an independent republic, the 21 original guilds resumed their complete control of the government.

In this lesson students analyze the official structure of the government of Florence during the Renaissance and how it actually functioned. Then they determine whether Florentines enjoyed a true democratic Republic.

Thank you very much for purchasing this lesson. Any feedback and hopefully a positive review will be gratefully appreciated.

Type a description for this product here... 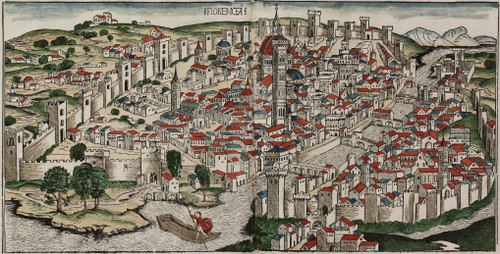