A PowerPoint presentation about LBJ's involvement in the plot to assassinate JFK and more specifically, the use of his new-found powers of the Presidency to cover it up. The presentation begins with LBJ's interesting (to say the least) political career, his rise through the Democratic Party ranks up to and including his being included on the Kennedy-for-President ticket in 1960. It continues with Bobby Kennedy's targeting of LBJ, using his powers as Attorney General to expose Johnson's scandal-ridden past in an effort to force LBJ off the ticket in 1964. Also included in this presentation is the hostility Texas oilmen had for Kennedy's interference in their ability to make money. After the assassination, the presentation concludes with the new President's payoffs to parties invested in a war in Vietnam, oilmen determined to maximize their oil-drilling profits in Texas, and organized crime figures desperate to get the Justice Department off their backs. And of course, included in this long list would have to be LBJ's payoff to himself. Eliminating Jack effectively neutered Bobby and LBJ's legal problems went away forever. (#7 in the series) 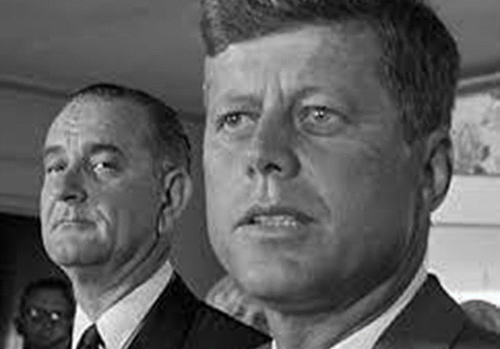