A PowerPoint presentation about the anti-Castro Cubans and their involvement in the assassination of JFK. It begins with the overthrow of the American-friendly Cuban government by Fidel Castro and all of the subsequent ramifications. It continues with the high hopes then-candidate Kennedy gave to organized crime and the anti-Castro community that Castro would be dealt with. Those hopes were dashed with the failed Bay of Pigs Invasion - for which JFK was blamed. Things worsened when the President didn't exploit the Cuban Missile Crisis and use it as a pretext for a Bay of Pigs "do-over" of sorts. The presentation explores the tension between the public declarations Kennedy made about Cuba vs. the private promises he made to Premier Khrushchev - showing the President to have made promises that couldn't possibly be kept - someone was going to be unhappy. In the choice between an unhappy USSR and a bunch of unhappy Cubans in southern Florida, Kennedy ultimately sided with Khrushchev, betraying the anti-Castro community again and again. Concluding the presentation is Kennedy's secret back-channel to Castro, hoping to normalize relations. Once this was leaked, it was to be Kennedy's final betrayal of the anti-Castro Cubans. Fool me once, shame on you. Fool me twice... (#8 in the series) 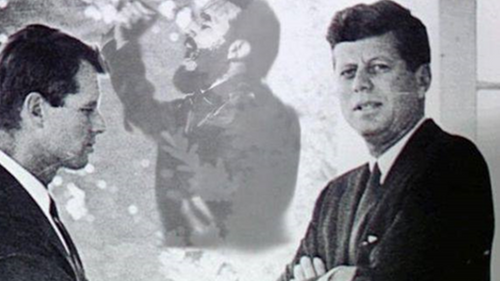