Origins and Effects of the Age of Imperialism: Debate Activity

This lesson plan is focused on the rationales for imperialism and its effects. The lesson begins with a brief PowerPoint to set up the topic and give students their directions for the debate.

For the activity, the class is divided into 5 teams. The first team serves as leaders of a nation. Their job is to decide whether their nation should pursue imperialism or not. Each member of this team is assigned one of the 4 debate teams to question and raise arguments with. They are then given the document that the debate team they are going up against is using along with a document for the other side. They are to use this information to create questions and arguments to use during the debate.

The 4 debate teams are each given a document either for or against imperialism (2 documents for each side). The debate teams use this information to write a speech arguing for their side. I also give my students butcher paper and have them make a poster to visually illustrate their main arguments. Once the teams are ready, the debate begins.

Each team takes its turn to present their speech and explain their poster. After their speech, the nation-leader assigned to question them poses their arguments and they debate the topic. *Note - the powerpoint does specify to the students that while we know today that imperialism is wrong, recreating the ideas and debates of the time period allows us to better understand the justifications for Imperialism.

During the debates, students are given a 2 page chart with questions to fill out during the presentations so that they have a record of the main ideas of each topic. An answer key to the chart is provided. There are 4 different documents. Two documents will be used by the imperialist side and two documents will be used by the anti-imperialist side. The documents are all between 1-3 pages long and cover the following topics: The White Man's Burden, Social Darwinism, The Abuses of Colonial Rule, and The Platform of the Anti-Imperialist League.

Anti-Imperialism Doc 1 - The Abuses of Colonial Rule a. How the African Congo suffered under the rule of King Leopold II and the rubber trade. b. Imperialist discrimination and segregation. c. European use of forced labor in colonies d. American rule and betrayal of the Philippines e. photos of victims of Congo's rubber trade 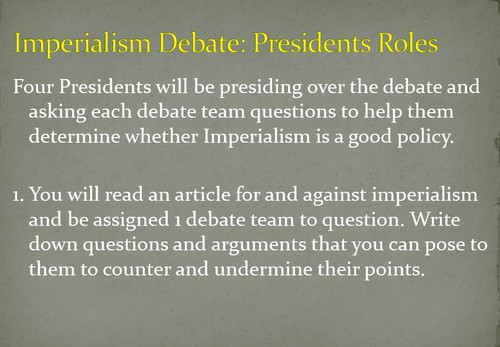 Origins and Effects of the Age of Imperialism: Debate Activity