This Video Response Worksheet and Key is based on the BBC documentary series "Planet Earth - Episode 3: Fresh Water."

(NOTE: These worksheets are based on the British version of Planet Earth [Season 1], narrated by David Attenborough. It uses the metric system and is, at the time of this posting, the version currently showing on Netflix and Amazon.)

Video Response Worksheets will turn your history or science lesson into a rich educational experience that keeps students attentive, engaged, and accountable. The questions are designed so that they occur at a regular pace to keep the students engaged but not overloaded. They are also designed so that a review of the completed worksheet gives students a basic overall summary of the video.

This episode is approximately 50 minutes long.

SERIES DESCRIPTION: With an unprecedented production budget of $25 million, and from the makers of Blue Planet: Seas of Life, comes the epic story of life on Earth. Five years in production, over 2,000 days in the field, using 40 cameramen filming across 200 locations, shot entirely in high definition, this is the ultimate portrait of our planet. A stunning television experience that captures rare action, impossible locations and intimate moments with our planet's best-loved, wildest and most elusive creatures. From the highest mountains to the deepest rivers, this blockbuster series takes you on an unforgettable journey through the daily struggle for survival in Earth's most extreme habitats. Planet Earth takes you to places you have never seen before, to experience sights and sounds you may never experience anywhere else.

IN THIS EPISODE: This edition takes an epic river journey following the descent of the planet's mightiest rivers from their mountain sources to the sea. Breathtaking river scenery is revealed by a revolutionary helicopter camera mount - from the world's highest and broadest waterfalls to the awe-inspiring spectacle of the 10,000-strong flocks of greater snow geese in flight.

We witness underwater swimming monkeys, giant salamanders - at two metres the world's largest amphibian - on the hunt in a remote mountain river of Japan, and river dolphins in the Amazon, showing off lumps of rocks to win over a mate.

New underwater worlds are discovered - we break the ice of the world's deepest lake, Baikal in Siberia, home to the only freshwater seal and bizarre giant amphipods. We dive into the Pantanal, the world's largest wetland patrolled by caiman and piranhas.

We also encounter dramatic showdowns between gangs of Indian otters and mugger crocodiles. In Africa, the lightning ambushes of Nile crocodiles on wildebeest are filmed for the first time at ultra-high speed.

BUY THE MULTI-EPISODE BUNDLE AND SAVE 33%. Individual episode worksheets are $1.49. Purchased separately, all eleven cost $16.39. Buy the entire bundle for only $10.98. 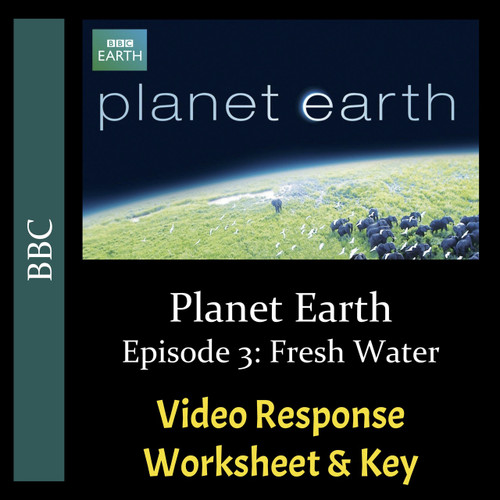