To celebrate the signing of the first Declaration of Independence from Mexico, Capt. Phillip Dimmitt’s volunteers made this flag as Nicholas Fagan cut a sycamore pole staff. They raised the flag and as it unfurled for the first time it was immediately pierced with a gunshot from the streets outside the wall. Three months later, Col. James Fannin and 400 Texian volunteers were imprisoned at Goliad after being captured nine miles away by General Urrea.

On the morning of March 27, 1836, the Captured Texians were divided into three groups. Some were told they were going home and some that they were going out to gather firewood. After they were marched outside, Mexican officers gave a signal and they were executed. 342 unarmed men were massacred, their bodies piled up, set ablaze. Col. Fannin and other Texian wounded were then shot inside the walls at Goliad. Fannin’s body was found in a ditch.

The 342 Texians laid in piles from March 27 to June 3, 1836. General Rusk and company found the bodies and buried them one block behind the Presidio.

Whether you're drinking your morning coffee, your evening tea, or something in between – Remember Goliad! It's sturdy and glossy with a vivid print that'll withstand the microwave and dishwasher. 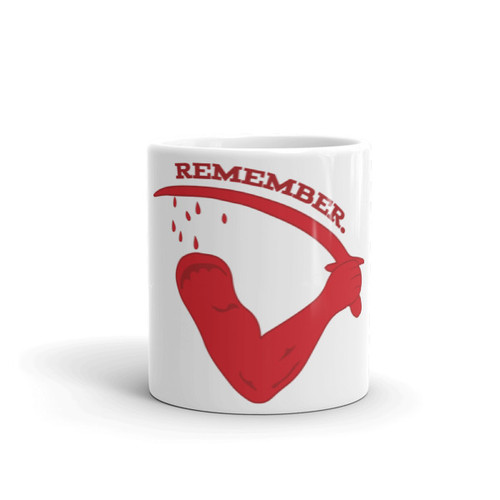