Check out Geography & Math Made Easy for more resources.

HITLER USED THE OLYMPICS FOR PROPAGANDA PURPOSES. THE POWERPOINT USES POSTER CREATED BY THE GERMANS AND POINTS OUT HOW PROPAGANDA TECHNIQUES WERE IMPLEMENTED SUCH AS USING SYMBOLS HIDDEN WITHIN THE IMAGES.

Following World War I, Germany was in economic, political, and physical ruins. In 1933, Adolf Hitler became Chancellor and began his quiet quest against anyone who was not Arian. In 1931, Germany was given the option of hosting the1936 Olympics. Hilter wasn't sure it was a good idea until he was convinced that they could build the largest stadium and make Germany look as if it was not in ruin. He agreed. The 1936 Olympics were different from the Olympics from the past. It incorporated theatre, high-tech equipment for the games, and a wonderful production with a lot of rituals that would continue into the Olympic games after Hitler's Olympics.

Hitler kept his secret of his war against the Jews throughout the two weeks of the Olympics using propaganda to show the world how well Germany was doing; the world, however, had no idea was in store for Germany and the Jews who lived within its borders. 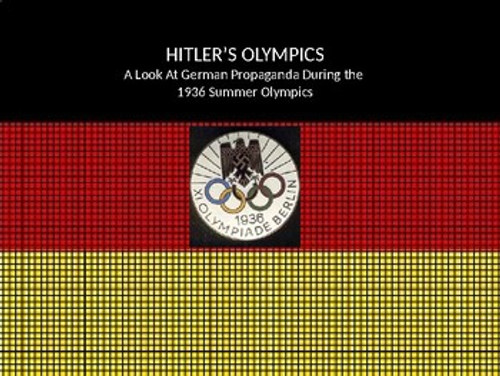