ELEMENTARY SPANISH FOR CHILDREN ANIMALS FLASHCARDS POSTERS These Spanish animals display posters/flashcards create a fabulous Spanish look and feel in the learning environment. I’ve found that this also helps promote Spanish as a living language, featuring in the everyday life of beginner learners of Spanish. They introduce learners to a range of animals in Spanish from the very beginning of their learning, and they are able to familiarize themselves with how Spanish words ‘look’, and how sounds are represented in the written form. I like to vary methodology when introducing new language, and as flashcards, they offer a welcome break from focusing on a whiteboard or similar tool.

My younger Spanish students really love the animals posters, and like to compare the Spanish and English words. I've found that they also help very young children develop their growing understanding of the animal kingdom. We don't necessarily learn all the animals, but we do use them for spelling, pronunciation and speaking practice, and for memory games. They really give the classroom a great Spanish ambiance too. Students definitely notice the different words for a/an, and ask why some animals are un, and others are una. I've used this as a useful prompt to introduce the concept of gender. The posters work just as well as flashcards, which are great for introducing and practicing language in general (students don't have to learn them all!), and for playing games to engage students with Spanish.

There are 20 animals using the masculine and feminine indefinite article, which again is a great opportunity to begin to compare Spanish to English. I’ve chosen a couple of insects and birds, as well as animals that feature in very popular stories, such as orso and lobo. Looking at language, and the ways it works, either similarly to, or differently from their first language, helps learners become implicitly aware of linguistic concepts in both languages, which I've found to be really useful for both current and later learning.

It doesn’t matter if some of the animals don’t feature in your immediate or even longer-term learning plan: the posters provide learners with daily opportunities to engage with the written word in Spanish, to develop their recognition and recall of individual words, to identify cognates, and to begin to link spelling with sound in Spanish. They also help learners begin to work out the meaning of new and unknown words from visual clues or prompts.

There are two sets of 20 9.5x11 (A4) portrait posters with two backgrounds to choose from - Spanish flag or animal footprint, s0 40 posters in all. I always laminate my posters / flashcards as they hang a lot better, are easier to manipulate as flashcards, and definitely last for years! The product is non-editable in a zipped format. It is copyright, all rights reserved. It may not be copied, rewritten, shared or distributed in any way. The license for purchase is a single-user license only. Please read the Terms of Use.

Have a browse in my store when you get chance - there are more Spanish printables, and a range of other languages and activity types too! 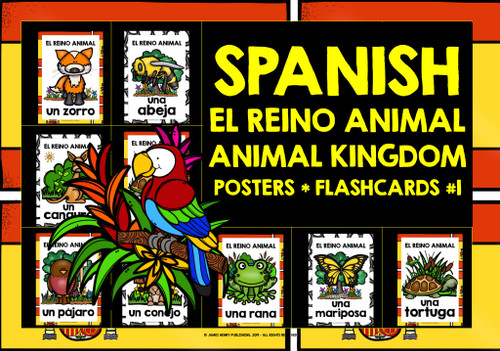